In the present study, the impact of maltitol-containing chewing gums on the dental plaque was evaluated in children.

Dental plaque is one of the three prerequisites for a caries lesion to develop, as shown in Figure 1 (1). It is a biofilm that adheres to teeth and consists of bacterial cells, bacterial wastes, salivary polymers, and other extracellular products. When plaque builds up, the microorganisms situated in the area of the biofilm nearest the tooth surface begin to ferment carbohydrates, producing demineralizing acids. Moreover, if a thick layer of plaque builds up on tooth enamel, the saliva is unable to penetrate the plaque to protect teeth through neutralization of acids or remineralization of the tooth surface.

Polyols are hydrogenated carbohydrates (also called sugar alcohols) used as sugar replacers. Unlike sugars, they are not fermented by the microorganisms present in the oral cavity and the dental plaque: they have all been tested and classified as hypo- or non-acidogenic.
Many studies have shown the oral health benefits of polyols-containing chewing gums (CG). The present study examined whether these benefits are due to the mere action of chewing, which increases salivary flow, or if the polyols themselves have a specific effect.

Three of the polyols most frequently used in sugars-free products are xylitol, maltitol, and sorbitol. Even though xylitol has been the most extensively studied regarding dental properties, it seems that chewing sugars-free CG three or more times daily for prolonged periods of time may reduce caries incidence irrespective of the type of sugar alcohol added (2). The present study focuses on maltitol and compares its effects to those of xylitol. 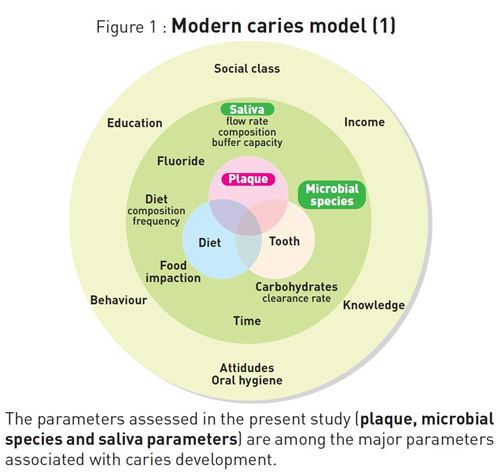 Evaluation of the impact of SweetPearl™ maltitol chewing gum (CG) on saliva and plaque parameters to prevent dental caries. This poster focuses on plaque parameters, and results on saliva flow and composition are presented in another one (3). 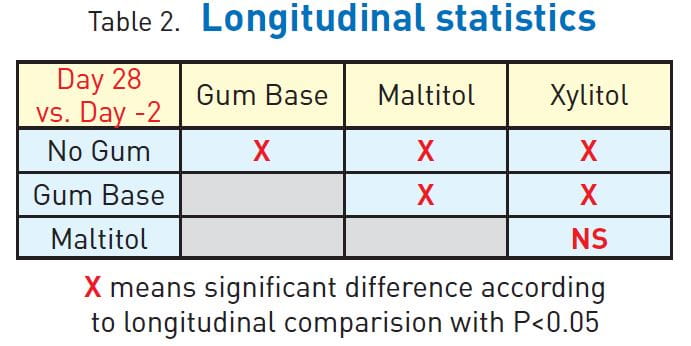 Decreased insoluble glucans prevent bacteria from adhering to the teeth.

The above bacteria species are believed to be associated with dental caries development. A decrease in their concentration reduces plaque aggregation and conversion of sugars into acids.

Sugars-free chewing gums after meals appeared to induce clear benefits on biomarkers related to dental caries development. It seemed that those benefits were not only due to the action of chewing but also to a specific polyol effect, similar to maltitol and xylitol. Major mechanisms involved seem to include lack of acidogenic potential, stimulation of the salivary flow, antimicrobial effect, and limitation of dental plaque formation.