Starches are historically well-known binders for wet granulation in pharma applications. In order to facilitate their use and increase their binding performance reliability, excipient suppliers have developed pregelatinized versions of starches. These ready-to-use products allow the formulators to avoid the cooking step and to have perfect control of the swelling rate of the starch granules. Such binders are generally added in the dry mixing phase (1).
The quality of granules will obviously depend on their formulation, the nature of the binder and its amount as well as the granulation method and the equipment used.
The old generation of granulation equipment employed for the development of pregelatinized starch as a granulation binder was low shear planetary mixer with limited performances. The low mixing capacity and the reduced amount of energy supplied to create interparticular bonds were often compensated by an increase of the binder quantity that generally resulted in a longer disintegration time. Since then, it is generally accepted to use pregelatinized starches in quantities between 10 to 15% of the total granules’ formulations (2).
Nowadays, high shear mixer is the favored modern granulation equipment, whether for continuous or batch production. This high level of energy delivered to the system allows to produce homogeneous mixtures and to fine-tune the quantities of binder added, whether in dry or liquid form (3).
The incorporation of the binder in dry form rather than in liquid form presents many advantages since this process does not need any dissolution of the binder prior to the granulation step. The binder is here simply added to the powder mix, and only water is spread on it, which leads to a more effective, quicker and cheaper process.

In this study, a mannitol/starch blend was granulated using either PolyVinylPyrrolidone (PVP) or PreGelatinized Starch (PGS) as binders. PVP and PGS powders were introduced in dry form in the mannitol/starch blend. Granules’ characteristics as well as the tablets’ properties made from them were measured. Comparison with reference values from granules and tablets obtained by wet granulation with a PVP solution was made.

PVP is considered to provide excellent binding strength and was taken as reference in this study. Powders’ properties after granulation were evaluated.

Moisture contents of the three formulations are linked to the composition and corresponds to the expectation.
According to the physical characteristics shown in table 1, all granules were considered to be suitable for being tableted. Figure 1. Impact of tableting speed on the granules’ tabletability.

Figure 1 shows that, at low tableting speed, tablets made with PVP granulated powder, whether with dry or liquid incorporation, exhibits a higher hardness than tablets made with starch at 20 and 25 kN. Granules bound with LYCATAB® PGS are less sensitive to the speed variation than granules made with sprayed solution of PVP. Granulation with PVP in dry form leads to capping at 20 kN/40 rpm, probably due to an incomplete hydration and heterogeneous distribution. LYCATAB® PGS thus appears to create more robust solid bridges than PVP, more particularly at high compression speeds. 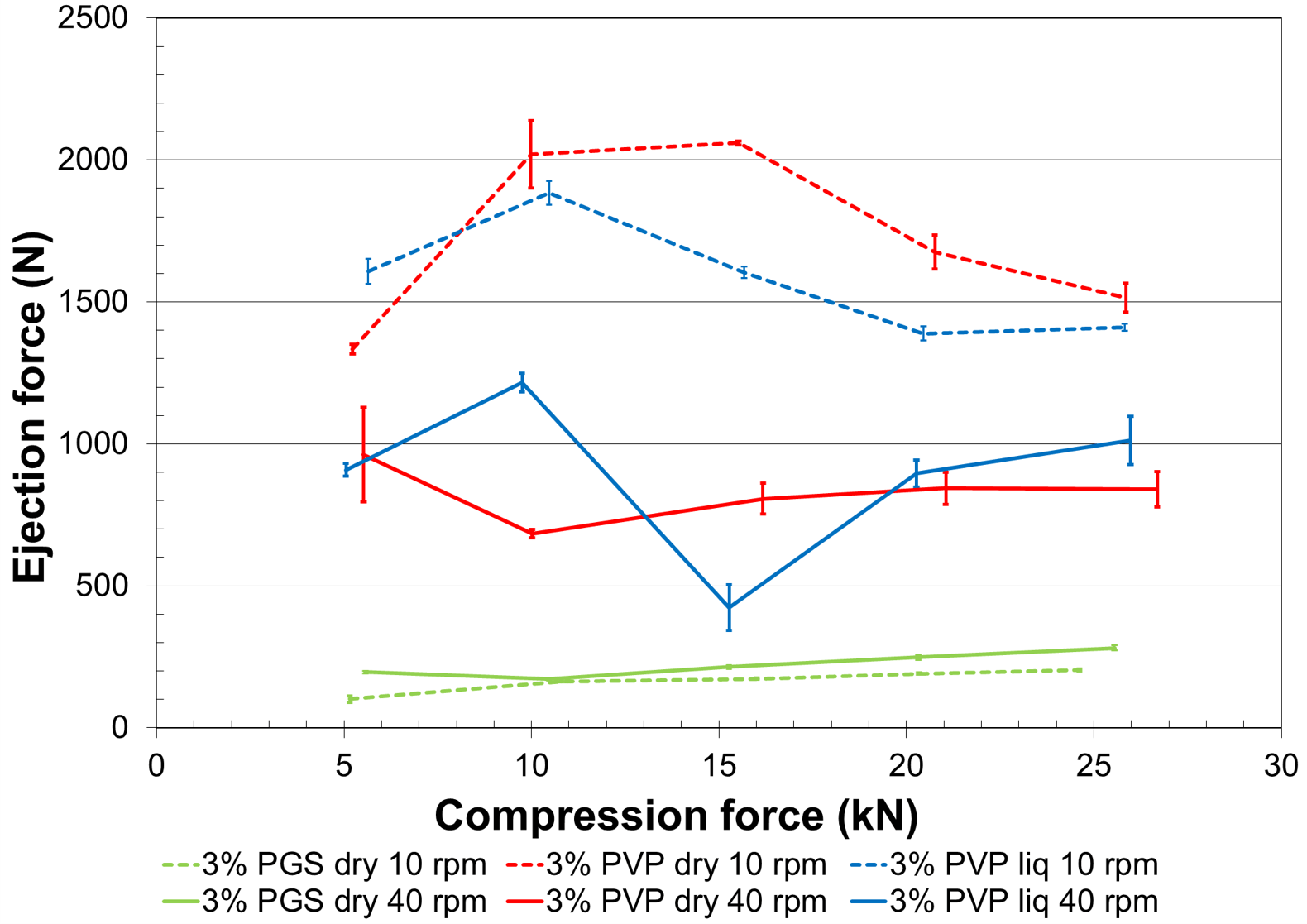 Figure 2 shows that tablets made with both dry and solubilized PVP generate high ejection forces at same compression force giving similar hardness. This indicates additional needs for lubricant, which generally leads to a negative impact on tablets’ properties. In contrast, 0.5% of magnesium stearate is enough to lubricate the mix granulated with LYCATAB® PGS which exhibits ejection forces compatible with industrial production requirement. This helps production scientist to run machines at faster speed with lower maintenance.

Figure 3. Impact of the binder on disintegration time.

Over time, it has become more frequent for pharmaceuticals developers to realize a wet granulation step by adding a binding solution to the powder mix in order to obtain the best homogeneity and the best performance for their formulations. This study shows that the granulation equipment improvement allows reconsidering the use of binders such as LYCATAB® PGS pregelatinized starch. The demonstration made here shows that LYCATAB® PGS enables making tablets with improved properties compared to the reference PVP (similar hardness but lower ejection forces and disintegration times). Moreover, LYCATAB® PGS does not need to be dissolved in the granulation liquid. It can simply be incorporated in dry form which improves the overall efficiency of the process by reducing time and energy needed.

Kollidon® 30 is a registered trademark of BASF, Germany.
® Registered trademark(s) of Roquette Frères.
The information contained in this document is to the best of our knowledge true and accurate, but all instructions, recommendations or suggestions are made without any guarantee. Since the conditions of use are beyond our control, we disclaim any liability for loss and/or damage suffered from use of these data or suggestions. Furthermore, no liability is accepted if use of any product in accordance with these data or suggestions infringes any patent. No part of this document may be reproduced by any process without our prior written permission. For questions about a product’s compliance with additional countries’ standards not listed above, please contact your local Roquette representative.