Numerous technologies are available to mask the bitterness of APIs, but their use in pediatric formulations is limited by the excipient’s toxicity, which is different for children compared with adults. So there is a need for formulations based on simple and well-known excipients.

Acetaminophen or paracetamol is one of the most common medications used to treat infants for pain and fever. Its bitterness often leads to complex formulations, needed to improve acceptability by a child’s palate. While testing several directly compressible (DC) excipients in a first study on the formulation of chewable acetaminophen tablets containing sucralose, it was observed that all DC polyols were able to give a pleasant texture, but surprisingly some formulations based on directly compressible maltitol from Roquette (SweetPearl® P300 DC) were judged less bitter. Therefore, masking the bitterness of acetaminophen by incorporating only a well-accepted intense sweetener (sucralose) and a bulk sweetener (maltitol), both of which are commonly used in pediatric medicines, is of significant interest.

It was hypothesized that the taste masking observed was due to a synergy of maltitol and sucralose, and that a specific ratio of maltitol/sucralose is required to mask the bitterness of acetaminophen (as well as a minimum amount of both). Thus, a study was carried out to determine if there is a specific property unique to sucralose, as an intense sweetener, that creates a synergy with maltitol, and to determine the optimal ratio of maltitol/sucralose required to mask the bitterness of a given dosage of acetaminophen.

The taste-masking effect of sucralose on acetaminophen has been studied in vitro using an electronic tongue system. But this type of equipment is not able to qualify the real taste of the formulated acetaminophen. The most reliable, and consequently recommended, method to determine taste-masking properties is through the use of a trained human taste panel who can detect taste as overall gustatory impression including smell, mouthfeel, visual appearance and emotions. For this study, the sensory panel was composed of 20 people trained in sensory analysis.

Different combinations of maltitol (bulk sweetener) with sucralose, saccharin Na, acesulfame K and aspartame (intense sweeteners) in acetaminophen chewable tablet formulations were tested to evaluate the taste masking of the combination of sweeteners.

In formulation series F1 to F3, the dosage of acetaminophen was 250 mg/tablet.

Chewable tablets containing 250 mg acetaminophen, 9 mg intense sweetener and 1230 mg maltitol with comparatively sucralose, saccharin Na, acesulfame K and aspartame. The sensory panel was able to discriminate between tablets and to rank them according to bitterness. Analysis using the Friedman test (designed to detect differences in treatments across multiple test attempts) showed the result was significant (significance level is 0.02167, i.e. far below 0.05).

Figure 1 shows the results of the HSD Tukey test, performed by comparing two tablets at a time on different days, and it reveals the following differences in taste and bitterness. 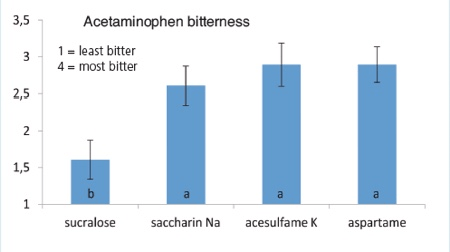 In the literature, the sweetness of sucralose is far higher than that of saccharin Na, acesulfame K and aspartame (respectively 600, 300, 200, 180 compared with sucrose). Here, the sucralose-based tablet was clearly found to be less sweet than expected considering the 600 equivalent sucrose sweetness. It was assumed that there is a competition between the sucralose taste-masking function and its sweetening function. Therefore, another sensory panel was conducted to evaluate the F2 series.

Formulations in which the intense sweetener quantities were adjusted to obtain the same sweetness as 9 mg sucralose using the literature data.

The sensory panel found it impossible to test the tablets as they were far too sweet and simultaneously very bitter. Furthermore, at such high dosage the intense sweeteners generate significant off-notes which are added to the paracetamol bitterness. Therefore, a new formulation using less intense sweetener (F3 series) was developed and tasted.

To perform a comparison based on the same sweetness level, the amount of sweetener was divided by two (i.e., equivalent to 4.5 mg of sucralose). The other ingredient’s amount was strictly the same as in the two previous series of formulations.

The sensory panel was not able to distinguish between the products. The Friedman test was not significant (it had a significance level of 0.9032). No trend was determined. According to the tasting panel, all the products were too bitter. Therefore, when incorporated at a concentration giving theoretically an acceptable sweetness, all intense sweeteners, sucralose, acesulfame K, saccharin Na and aspartame have no masking effect on the bitterness of acetaminophen.

The F4 series of formulations were tested using a fourth sensory panel.

To confirm that masking the bad taste of acetaminophen requires a minimum amount of sucralose with regards to acetaminophen dosage, the acetaminophen dosage was decreased from 250 mg to 150 mg. A new series of tablets formulated with 150 mg acetaminophen and with an amount of intense sweeteners equivalent to 4.5 mg sucralose were prepared and tested by the panel. The sensory panel was able to distinguish between the products, and the Friedman test significance level was 0.01252. A histogram comparing the HSD Tukey ranks is shown in Figure 2. 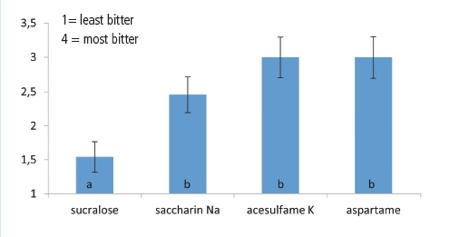 In this series of formulations, the (F4) maltitol/sucralose combination was once more evaluated as being able to mask the bitter taste of acetaminophen. Therefore, there is a clear synergistic masking effect of sucralose when added to a maltitol-based chewable tablet formulation. This taste-masking effect is specific to the intense sweetener sucralose as it is not obtained with saccharin Na, acesulfame K and aspartame.

This required amount of sucralose would normally have produced tablets that were too sweet, but this extreme sweetness was not experienced by the panel. It was presumed that there is some competition between the sucralose taste-masking function and its sweetening function. The amount of maltitol was kept constant. The texture of the chewable tablets is obtained by the use of a DC maltitol (SweetPearl® P300 DC), and a minimum amount of this directly compressible bulk ingredient is needed to obtain such chewable tablets by direct compression.

In conclusion, the sensory panels found that the ratio between acetaminophen/maltitol/intense sweetener must be adjusted and that the best combination is using sucralose, which reinforces the sweet taste of maltitol, while adding a taste-masking effect. Finally, this study demonstrates the benefits of a DC maltitol and sucralose combination for use in the formulation of pediatric acetaminophen chewable tablets with improved taste.