Controlled release dosage forms deliver an effective dose of the active pharmaceutical ingredient over a prolonged duration, which is particularly advantageous to maintain a constant plasma drug concentration within the therapeutic window. This effectively overcomes the negative peak-trough effects associated with multiple dosing of immediate release formulations. In addition, controlled release formulations also feature significantly in patient-centric pharmaceutical design, given the reduced administration frequency hence improved patient compliance. The most common strategy involves dispersing the active ingredient homogeneously in a hydrophilic polymer matrix, which hydrates and swells upon contact with biological fluids to form a viscous diffusion gel barrier which limits drug release. Hydroxypropyl methylcellulose (HPMC) is among the most widely used excipients as a water-soluble, hydrophilic controlled release matrix. However, standard HPMC powders are associated with flow issues due to their fibrous nature, rendering it unsuitable for tableting via direct compression. In this work, PEARLITOL® CR-H HPMC co-processed with mannitol from Roquette Frères was evaluated based on critical quality attributes necessary for a directly compressible, controlled release excipient. In addition to texturization, mannitol also acts to modulate drug release from the polymer matrix. Figure 2. Flow properties of PEARLITOL® CR-H in comparison to direct compression grade HPMC (HPMC DC), pure HPMC and physical blend of HPMC-mannitol: Angle of repose (A) and Hausner ratio (B).

Table 1. Flow properties of PEARLITOL® CR-H batches using “flow through an orifice” following Ph. Eur. Chapter 2.9.16 – Flowability. Apparatus II was used with a 10mm orifice. 100g of powder was sampled for each measurement. As shown on figure 3, both the physical mixture and co-processed HPMC–mannitol produced tablets of high tensile strength > 1.6 MPa at compression forces of 150–200 MPa which is typical for industrial production. 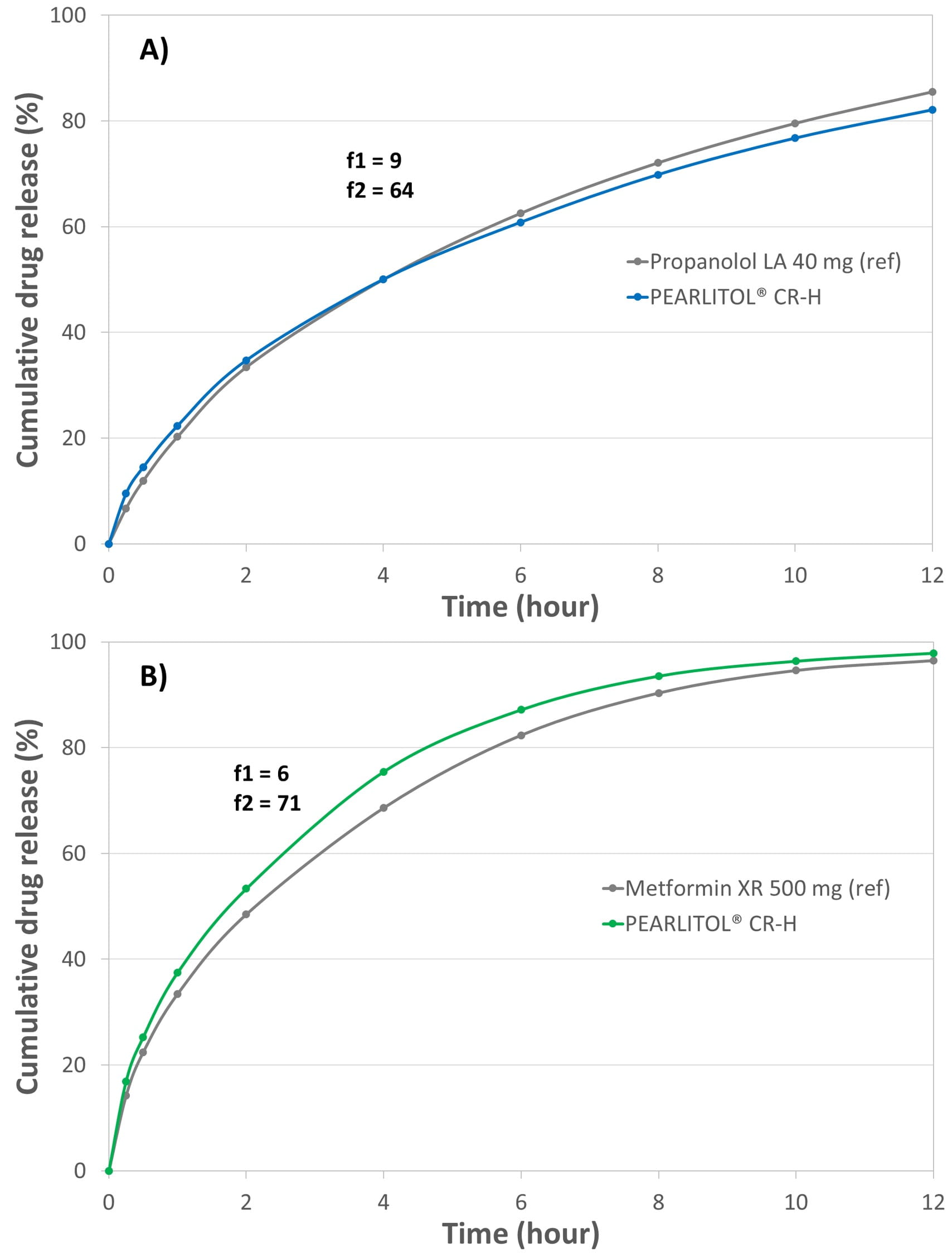 Figure 4. Drug release performance of PEARLITOL® CR-H co-processed HPMC–mannitol in comparison to commercial products for metformin HCl (A) and propranolol HCl (B). Similarity factors (f1 and f2) are embedded in the graphs.

The tablets made in-house from PEARLITOL® CR-H exhibit a similar drug release profile when compared to the commercial products for both propranolol (Ciplar 40, Cipla) and metformin (Glucophage XR, Merck), as shown from the similarity factors (figures 4[A] and 4[B]).

METHOCELTM DC2 K4M is a registered trademark of Colorcon, USA.


The information contained in this document is to the best of our knowledge true and accurate, but all instructions, recommendations or suggestions are made without any guarantee. Since the conditions of use are beyond our control, we disclaim any liability for loss and/or damage suffered from use of these data or suggestions. Furthermore, no liability is accepted if use of any product in accordance with these data or suggestions infringes any patent. No part of this document may be reproduced by any process without our prior written permission. For questions about a product’s compliance with additional countries’ standards not listed above, please contact your local Roquette representative.