The development of solid dosage forms that can be chewed or easily dispersed in the mouth is particularly attractive for the pediatric and geriatric markets.1 A key challenge for the final patient's acceptance is in the design of tablets having an appealing texture, as well as an acceptable taste and mouthfeel.2, 3 The selection of excipients is critical in achieving a tablet's disintegration in the oral cavity, a pleasant mouthfeel, and robust tablets that can withstand processing and transportation.

Our DC polyols range displays a palette of different textures as a result of their inherent physicochemical properties, such as enthalpy of dissolution and crystal shapes.4 For instance, Xylitol exhibits a cooling effect upon dissolution in the mouth and tablets containing maltitol provide a "crunchy" sensation when chewed.5, 6, 7 The purpose of this study was to propose different methodologies for assessing the feelings of brittleness, crunchiness and melting in the mouth upon chewing tablets formulated with polyols.

The prepared tablets were evaluated for physical parameters, such as thickness–using a standard micrometer and hardness–using an ERWEKA TBH 30 GMD hardness tester (ERWEKA GmbH, Germany).

Development of an In Vitro Sensory Evaluation Test

The test was developed using a texture analyzer that records applied forces through probes. Two tablet quarters were placed side by side in a specially designed cup. Then, a 10 mm diameter probe on contact with the top of the tablet pieces went down at a constant rate. The resulting variation of the force was recorded along 3.5 mm of the displacement of the probe inside the tablet. The fragmentation process of the tablet upon collapsing appeared as multiple peaks (Figure 1). Each test was repeated four times. The overall quantity and frequency of the peaks would be a good indicator of the sensation of "crunchiness" during chewing of the tablet.

The perceived intensity of these three sensory attributes was rated by each individual on a scale of 0-7 (where 0 = not apparent and 7 = very apparent). The statistical analyses were performed with ANOVA Friedman and Wilcoxon tests.

Study of the Compression Settings on Tablet's Properties

There is practically no fragmentation observed for NEOSORB® XTAB 300S tablets. The curves are flattened in comparison with tablets made of SweetPearl® P300 DC and XYLISORB® XTAB 240. This result was observed for both 100 N and 250 N tablets. Accordingly, the maximum force required to breakdown the tablet increased with the increase in tablet hardness (Table III). When we consider the maximum force required for disruption of XYLISORB® XTAB 240 tablets, this force is higher for both 100 N and 250 N tablets than for NEOSORB® XTAB 300S tablets. We observe also that the number of peaks is multiplied approximately 20-fold. These results highlight different behaviors for the two polyols and, therefore, would confirm differences in the perception of these two polyols upon chewing and dissolution in the mouth. The SweetPearl® P300 DC tablets exhibit an intermediate behavior between NEOSORB® XTAB 300S and XYLISORB® XTAB 240 tablets. 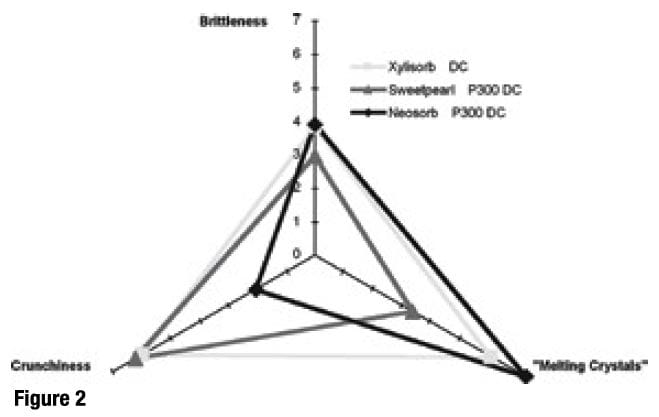 In Vivo Versus In Vitro Sensory Evaluation

When we compare both in vitro and in vivo sensory evaluation testing, we can correlate the difference in behavior of the tablet during fragmentation under pressure with differences in the crunchiness and melting attributes. NEOSORB® XTAB 300S tablets are characterized by a predominance of melting sensation upon chewing probably as a result of the particular crystalline shape of the particles and high compressibility of the powder, which is in agreement with the rather flat fragmentation curve. SweetPearl® P300 DC tablets exhibit more crunchiness. XYLISORB® XTAB 240 tablets combine both melting and crunchiness attributes. Both SweetPearl® P300 DC and XYLISORB® XTAB 240 have the crunchiness anticipated from their fragmentation curves.

The overall acceptance from a palatability point of view between these three polyols was evaluated. There is a clear preference for XYLISORB® XTAB 240 tablets with approximately 70% of the entire panel (Figure 4).

This study describes two different methodologies for sensory evaluation of two attributes–crunchiness and melting. The differences observed in both attributes can be directly linked to the compressibility behavior and the crystal shape of the powder, and more specifically to the rearrangement and the brittleness of the different polyols under compression. The in vivo study has revealed that the evaluation of both crunchiness and melting is a good combination for predicting a good taste and mouthfeel.