Magnesium stearate (MgSt) is a common lubricant that is added to tablet formulations to reduce the friction between granules or powders and the die wall during compression and ejection. Its popularity may be attributed to its relatively low friction coefficient and large “covering potential,” which are desirable lubricant properties.1 An effective amount of lubrication is usually needed during high speed tableting at the production level to avoid issues during tablet ejection. The typical range of MgSt used as a lubricant is between 0.25 to 5 %, w/w. The effective concentration of MgSt in the final formulation should take into consideration its impact on various critical tablet quality attributes. While increasing the MgSt amounts would reduce the ejection forces, it has been reported that higher MgSt concentrations adversely impacted tablet hardness, disintegration and dissolution times.2 Hence, the MgSt concentration is an important parameter to be managed in any given tablet formulation.

It is ideal to achieve a uniform distribution of MgSt particles on the surfaces of the active pharmaceutical ingredient (API) and excipient particles. Lubrication is achieved through the surface coverage arising from adsorption of the MgSt onto the particles in the formulation during the initial phase of mixing.3 As mixing continues, MgSt particles will become sheared off from the aggregates. The overmixing of MgSt is unfavorable, and the lubrication efficiency may be diminished. In this regard, it is also industrially recognized that sieving of MgSt before mixing it into the tablet formulation is important to break up the MgSt agglomerates as the agglomerates may hinder the lubrication efficiency or result in bonding issues within the tablet formulation.

The purpose of this study was to evaluate the impact of MgSt concentration (Roquette Magnesium Stearate) and MgSt mixing time on the tablet ejection forces and resultant tablet properties (tablet hardness and disintegration time) based on a model formulation of microcrystalline cellulose (MICROCEL® 102 SD; MCC) and mannitol (PEARLITOL® 200 SD). The MCC-mannitol formulation was selected as a representative tablet formulation comprising a blend of materials that deform plastically or undergo brittle fragmentation respectively. A Design of Experiment (DOE) approach was employed to understand the relative impact of the two variables on the responses within the design space. The results of this study would serve as a useful reference for similar formulations that require the optimization of MgSt concentration and mixing time.

Roquette Magnesium Stearate (specific surface area of 5-10 m2/g) was used as the lubricant while MCC (MICROCEL® 102 SD) and mannitol (PEARLITOL® 200 SD) were used as the fillers in a 1:1 blend ratio for this study. The formulations varied in terms of the MgSt concentration (0.2-1.5 %, w/w) and mixing time for the incorporation of MgSt (1-12 min). Based on a central composite study design, 13 runs were generated for evaluation (table 1). Runs were randomized and runs 5-9 were the center points included in DOE design to check for linearity, process stability and detect variability in data.

The fillers (MCC and mannitol) were first blended using the Turbula blender (T2F, WAB) at 40 rpm for 5 minutes. Roquette magnesium stearate was sieved and added to the MCC-mannitol blend and blended as a second step at 40 rpm. The mixing time of MgSt was varied according to the conditions listed in table 1. Tablets were prepared using the compaction simulator (StylOne, Medelpharm), simulating a Fette P2090 rotary tablet press at 28 rpm, which corresponded to a speed of 60480 tablets/h. Tablets of 350 mg target weight were prepared using a 11.28 mm flat face round punch, under various compression forces between 10-20 kN. The tablet ejection force (determined from the compaction runs), tablet hardness (PTB420, PharmaTest) and disintegration time (PTZ Auto, PharmaTest) were determined for each tablet formulation. The data was statistically analyzed and modeled using the Minitab 21 software based on the input variables. Model testing was subsequently carried out to verify the model generated from the study.

Tablets were prepared between 10-20 kN to determine the corresponding hardness values with respect to the two variables – MgSt concentration and mixing time. Regardless of compression force, higher concentrations of MgSt resulted in lower tablet hardness (figure 1-A). This is not unexpected, as the greater formation of the MgSt ﬁlm around the particles in the formulation with higher MgSt concentrations may have interfered with the particle bonding and densification of the formulation, resulting in lower overall mechanical strength. This is also in congruent with the results obtained with longer MgSt mixing time, as shown for formulations with 0.85 %, w/w MgSt (figure 1-B), where the increase in mixing time was not beneficial for the tablet hardness. Although these observations have been reported in the literature,2-4 there is a gap in the understanding of the relative effects of MgSt concentration and mixing time in a formulation with both materials that deform plastically or undergo brittle fragmentation. This further supported the need to evaluate both variables on the resultant tablet properties simultaneously through a DOE approach. Figure 1. Tablet hardness values determined for (a) different MgSt concentrations with a 6.5 min MgSt mixing time and (b) different mixing times based on a formulation with 0.85 % MgSt.

Runs with (*) represent the center points in the study design.

Reproducibility of results was observed with the five center point runs (Runs 5-9). The ejection force response was not considered in the modeling due to the small variation observed in the dataset. The modeled equation for tablet hardness, as a function of MgSt concentration (variable A; expressed in %) and mixing time (variable B; expressed in min) is as follows:

Figure 2. Main effects plot for tablet hardness according to the input variables. 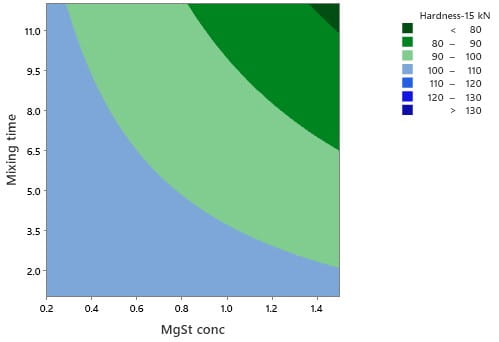 Figure 3.  Contour plot for tablet hardness according to the input variables.

For tablet disintegration time, the modeled equation as a function of MgSt concentration (variable A; expressed in %) and mixing time (variable B; expressed in min) is as follows: 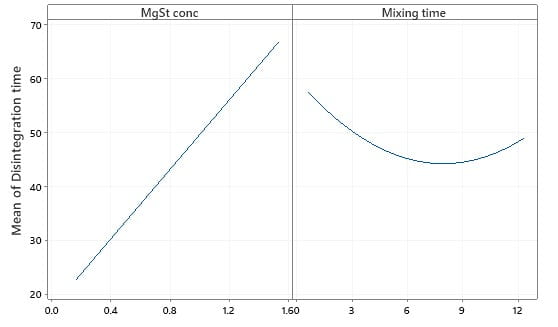 Figure 4. Main effects plot for tablet disintegration time according to the input variables.

Based on the contour and surface plots (figure 5), it was evident that the tablet disintegration time was greatly impacted by the MgSt concentration. The contour regions at higher concentration corresponded with higher disintegration times regardless of the mixing time. With higher amounts of MgSt, the hydrophobic film that is formed by MgSt would have affected the penetration of water into the tablet to a greater extent. Collectively, the findings were in good agreement with the results reported by Yüksel et al. 2

Figure 5. (A) Contour plot and (B) surface plot for tablet disintegration time according to the input variables.

To verify the validity and accuracy of the two models, model testing was carried out based on the range of 0.5-1 %, w/w MgSt concentration and 5-10 min of mixing time. Based on the input parameters for MgSt concentration and mixing time, tablets were prepared and characterized. The tablet hardness and disintegration time were compared to the modeled results. The results are shown in table 4. The hardness and disintegration time were well predicted by the models (equation 1 and 2 respectively).

An understanding of how the MgSt concentration and MgSt mixing time would impact the tablet formulation is imperative to manage the desired tablet properties. In this study, a representative formulation comprising MCC and mannitol as plastically deforming and brittle fragmenting fillers respectively was selected for evaluation. While the ejection forces registered were well below 250 N, the results of the DOE demonstrated the significant impact of both MgSt concentration and mixing time on the hardness and tablet disintegration time. Furthermore, the quantitative effects described by the modeled equations for both responses could serve as a useful reference for similar tablet formulations.

3. Kikuta JI, Kitamori N. Effect of mixing time on the lubricating properties of magnesium stearate and the final characteristics of the compressed tablets. Drug development and industrial pharmacy. 1994 Jan 1;20(3):343-55.

The information contained in this document is to the best of our knowledge true and accurate, but all instructions. recommendations or suggestions are made without any guarantee. Since the conditions of use are beyond our control, we disclaim any liability for loss and/or damage suffered from use of these data or suggestions. Furthermore, no liability is accepted if use of any product in accordance with these data or suggestions infringes any patent. No part of this document may be reproduced by any process without our prior written permission. For questions about a product’s compliance with additional countries’ standards not listed above, please contact your local Roquette representative.