Orodispersible tablets or orally disintegrating tablets (ODTs) are dosage forms formulated in such a way as to improve a pharmaceutical product’s in vivo oral disintegration and dissolution rates. In order to achieve rapid disintegration rates, the tablet formula must provide a high porosity, low density and low hardness.1, 2

The most common preparation methods used to produce tablets are: molding, lyophilization, freeze-drying and direct compression.3-7 The basic approach of developing ODTs via direct compression involves the blending of a filler, superdisintegrant, a lubricant and an active pharmaceutical ingredient (API) and then compressing the mixture.8-11

Mannitol is commonly used as a diluent or bulk excipient in the formulation of ODTs. A new generation of coprocessed mannitol-based excipients has been developed by Roquette for the formulation of ODTs. For example, PEARLITOL® Flash is a combination of mannitol and starch. Mannitol and starch are compliant with international pharmacopoeias and the combined ingredient is specifically designed to disintegrate rapidly, providing a smooth texture without the addition of superdisintegrant.

In the study presented here, the physical properties of PEARLITOL® Flash were evaluated through a series of tests that revealed the impact of different compression parameters (precompression and compression forces, tableting speed) on tablet properties while using two different types of conventional tablet presses.

The materials used in this study were PEARLITOL® Flash (a combination of mannitol and starch from Roquette) and magnesium stearate as a lubricant (purchased from Bärlocher). The powder properties, such as bulk and tapped density, angle of repose (using Hosokawa equipment), the flow rate through an orifice (using FloDex), the Hausner ratio and the Carr index, were all determined according to US Pharmacopoeia (USP) and European Pharmacopoeia (Ph. Eur.) methods in order to characterize the physical properties of PEARLITOL® Flash. 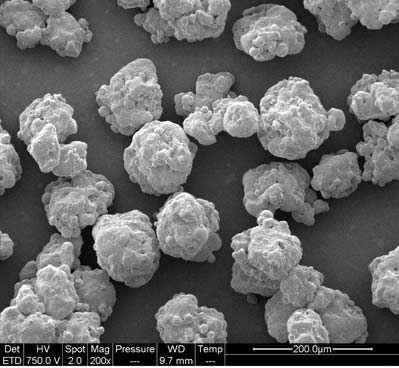 The physical properties of PEARLITOL® Flash powder are shown in Table 2. It is a free-flowing powder consisting of white, colorless, agglomerated particles of 150 μm mean diameter (Figure 1). These data confirm that the material has flow properties well adapted to direct compression, even at high production rates. Due to its non-hygroscopic nature, mannitol is a versatile excipient used to formulate moisture sensitive drugs. This intrinsic property of mannitol is transferred to PEARLITOL® Flash despite the fact that it is combined with starch (Figure 2). 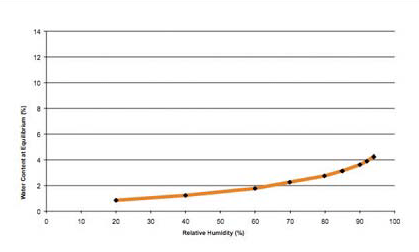 The tests carried out using varying compression settings with the Korsch XP1 provided an insight into the influence of compression force on ODT tablet performance.

Figure 3: Hardness and friability as a function of compression force

Figure 4: Disintegration time as a function of compression force

To show the influence of tableting speed on ODT performance, tablets were produced at 20, 40 and 60 tablets/min. No significant impact on the tablet properties was observed while increasing tableting speed (20-60 tablets/min) (Table 4 and Figure 5). Tablet mass uniformity met the requirements of the Ph. Eur (m ± 5%). The hardness remained quite constant, while the disintegration time was lower but not statistically different for the higher tableting speed. For all tableting speeds, the increase in speed resulted in an increase of ejection force, but it still remained very low (under 230 N). The low values for the ejection forces (Tables 3 and 4) confirm that 0.4% of magnesium stearate is enough to lubricate PEARLITOL® Flash. 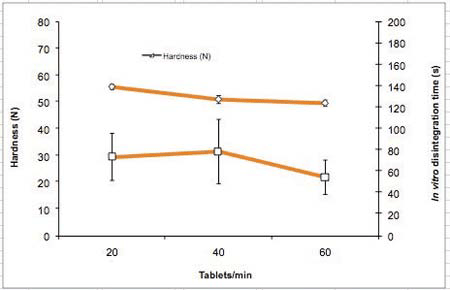 Figure 5: Hardness and in vitro disintegration time as a function of tableting speed (compression force 15 kN)

Table 4: Tableting speed study – Compression and tablet data – results shown for a 15 kN compression force (mean ± SD)
The impact of compression settings on tablet properties were also studied using a Stylcam. This study was conducted to find the optimal tableting parameters for the formulation of small (8 mm) convex tablets of 150 mg at an industrial level (Figure 6). The Stylcam was set to simulate a rotary press (Fette P1200) at a production rate of 72,000 tablets/h. Among all the parameters that could be evaluated, the precompression and compression forces were the ones selected in addition to the impact of production rate. 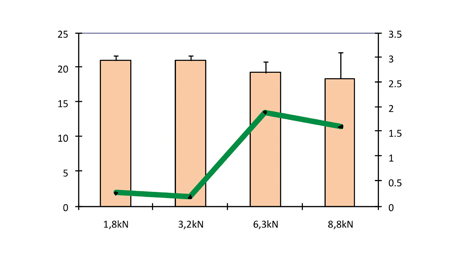 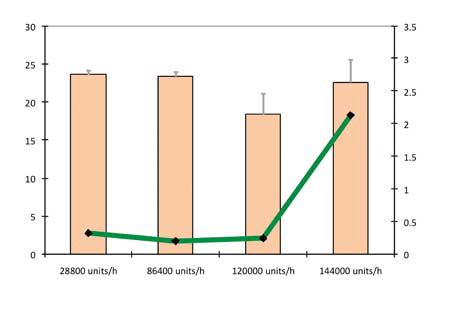 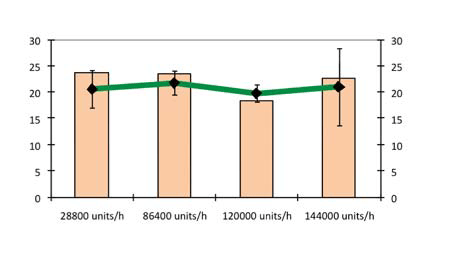 In conclusion, PEARLITOL® Flash has been developed as a self-disintegrating mannitol compound for the formulation of ODTs by direct compression. Irrespective of what size of tablet was chosen (13 mm or 8 mm), mechanically stable tablets were obtained for compression forces of around 14-15 kN. The Stylcam simulator has allowed us to find the optimal settings for small sized tablets with a convex shape. A precompression step has been identified as necessary to limit the occurrence of capping. Thanks to the specific composition of PEARLITOL® Flash, only a very low level of lubricant is required (approximately 0.4-0.5%).

This study also revealed that the disintegration time could not be correlated to the compression force, nor the hardness or the tableting speed. To conclude, PEARLITOL® Flash fulfills the requirement of excipients used to formulate ODTs in terms of flowability, hygroscopicity, compactibility, and disintegration.

The information contained in this document is to the best of our knowledge true and accurate, but all instructions, recommendations or suggestions are made without guarantee. Since the conditions of use are beyond our control, we disclaim any liability for loss and/or damage suffered from use of these data or suggestions. Furthermore, no liability is accepted if use of any product in accordance with these data or suggestions infringes any patent. No part of this document may be reproduced by any process without our prior written permission