Gelatin has been used as shell polymer in the manufacture of soft gelatin capsules (softgels) for about the past century. Its rheological and thermal properties offer adequate balance for subsequent process steps including gel solution preparation/transportation, film casting, and capsule sealing/drying. Even though this material represents the current gold standard for soft capsules, it presents certain technical challenges such as cross-linking. In other words, it may react with some capsule active fills during storage, leading to a delay in the release time. Moreover, gelatin-based soft capsules are sensitive to heat during production, as well as during storage. Finally, both the cross-linking tendency and heat sensitivity limit the options for fill materials, especially those requiring higher processing temperatures.
Multiple vegetal origin materials were investigated as potential replacement for gelatin. Various modified starches (corn, tapioca, etc.), alone or in combination with some hydrocolloids (carrageenan, alginates, gellan gum, etc.) were used to develop non-gelatin shell formulations over the last two decades.  Some of the existing commercial options are associated with important initial investment such as the need to modify the equipment (tumble dryers, etc.), or to buy special feature parts (gel mixer, spreader boxes, etc.). From a process standpoint, they are also often associated with limitations such as lower production speed, longer drying time, and capsule defects like leakage or stickiness in comparison with gelatin.
Riding the wave of sustainability, “vegan” or “clean label,” pharmaceutical and nutraceutical companies are now trying to combine the best of both worlds. Actually, they are looking at vegetarian alternatives that display similar or even higher technical performance than gelatin for the production of soft capsules: using standard equipment at full speed, to deliver optimal capsules with additional fill material options and better stability.

In this study, capsules were produced using either a powder premix composed primarily of starch/carrageenan or gelatin as shell material. Capsule characteristics were measured after drying and up to six-month stability at various environmental conditions using two packaging systems. A comparison of starch- vs. gelatin-based capsules was performed.

Approximately 100 kg of gel mass was prepared in a vacuum mixer (Olsa, Italy) by adding the different shell materials in a mix of water and glycerol at 40°C. The systems were homogenized while heating above 70°C and 85°C for gelatin and starch formulation, respectively, until the materials were melted. A final degassing step is applied under agitation before unloading the material in heated tanks.

After connection of the pressurized holding tank to the spreader boxes using heated pipes, films of 600 – 700 µm thickness were casted on cooling drums on both sides of the encapsulation machine (Changsung, Korea). Then, the fill material (fish oil with vitamin D3) was injected at the injection wedge station before sealing of the capsules with a temperature range from 45 to 60°C.

After production, the capsules were dried in tumble dryers for about 1h30. Then they were further dried on trays in a room with controlled environment (20°C ± 2°C, NMT 20% relative humidity) for 4 – 5 days, which represented stability time zero (T0). Capsules were tested for integrity - visual inspection, hardness – texture analyzer (Instron®, France), disintegration time – Pharmatron® DT50 (Sotax AG, Switzerland) and moisture content.

Capsule characteristics were determined at T0 and three months (T3) after storage in alu/PVC blisters or glass bottles. 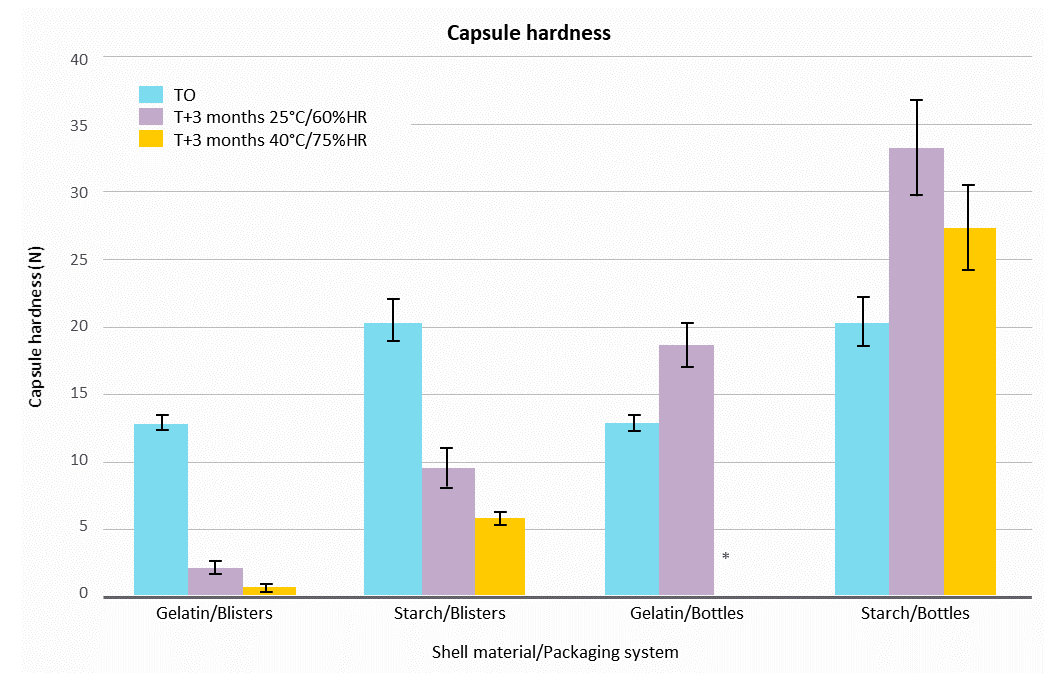 Figure 1 shows that both gelatin- and starch-based capsule hardness decreased after 3 months in blisters. The drop was more important at 40°C/75% RH. The hardness was just above the limit of quantification for gelatin soft capsules. In bottles, both gelatin and pea starch capsules showed a hardening at 25°C/60% RH. At 40°C/75% RH, it was not possible to measure the hardness of gelatin capsules, because they were melted, deformed and stuck to each other in the bottle. 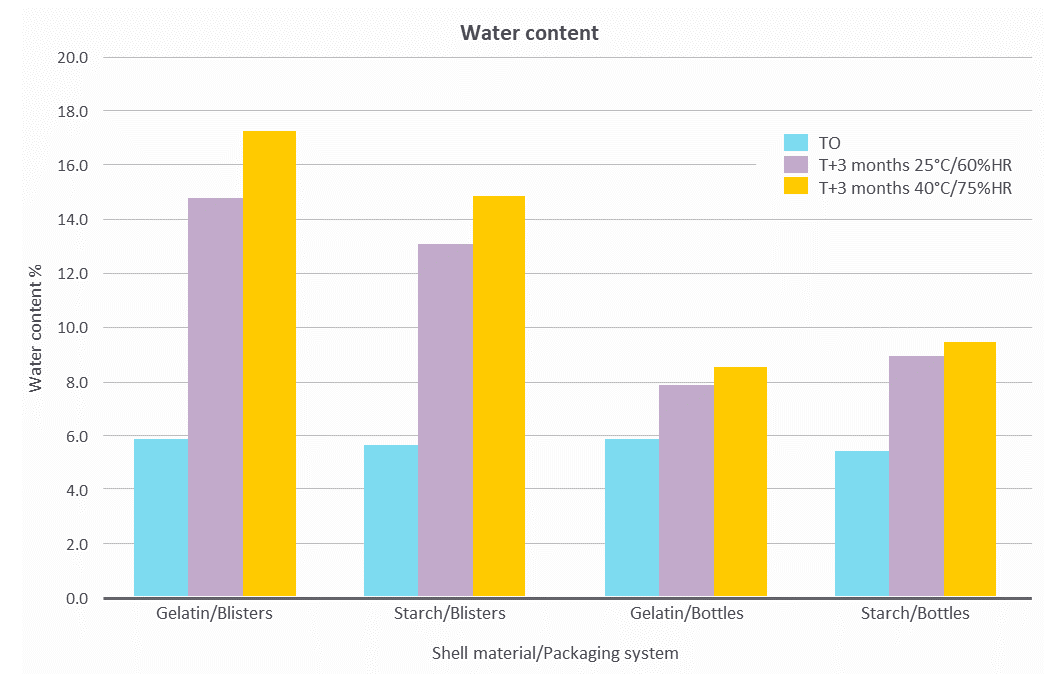 Figure 3 shows that shell moisture increased during stability for all the capsules. This increase was more significant in blisters than in bottles and at 40°C/75% RH than at 25°C/60% RH. These data confirm the need for packaging with adequate moisture barrier for both gelatin and LYCAGEL® based soft capsules.