Selecting the Best Platform for Optimization of ODT Disintegration Time

Orodispersible Tablets or Orally Disintegrating Tablets (ODTs) are of growing interest as delivery systems for the  administration of active ingredients in pharmaceutics and nutraceutics. ODTs are a patient-friendly alternative to the traditional “tablet and a glass of water” as they disintegrate quickly in the mouth. This simple and convenient administration makes ODTs a key player in the battle to achieve patient compliance, particularly suitable for pediatric, geriatric and psychiatric patients.(1)

The composition of the ODT platforms evaluated is described in Table 1.

Preparation of the tablets
300 mg tablets were prepared by blending the ODT platform (P1, P2, P3 or P4) (99%) and the lubricant magnesium stearate (1%), for 3 minutes in a TURBULA® blender. The blend obtained was then compressed using a press simulator, STYLCAM® 200R, allowing a good simulation of the formulation's behavior in an industrial environment. The tablets were compressed at hardness of 50 N and 90 N at a tableting speed of 40500 tab/h using flat circular punches of 10 mm. The rotary press simulated was a Fette 2090i.

Figure 3. In vivo disintegration times of ODTs (50 N and 90 N) made from different marketed ODT platforms

The quickest in vitro and in vivo disintegration times demonstrated by PEARLITOL® Flash can be explained by its higher wettability. The wettability of a tablet is known to be a critical factor impacting disintegration time; thus, the penetration index as function of time was used to compare PEARLITOL® Flash against two other platforms containing either crospovidone or croscarmellose (Figure 4). 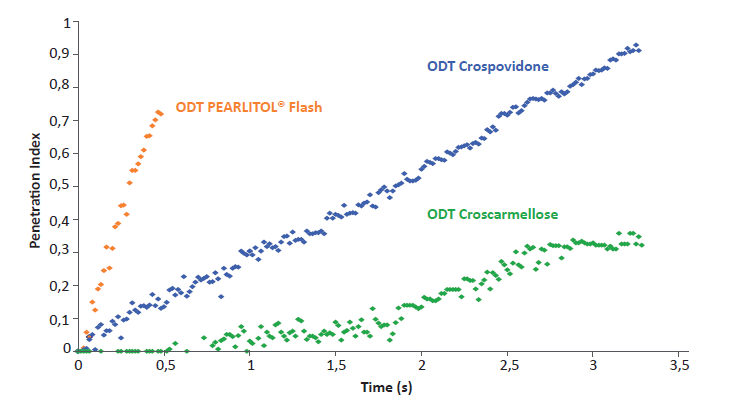 Figure 4. Penetration index vs time of ODTs made from platforms without (PEARLITOL® Flash) or with superdisintegrants.

The penetration index is defined as the quantity of water taken up by the tablet, and its evolution over time can be used as an indicator of the wettability of the tablet. The higher the slope displayed, the faster the water penetration into the tablet. This in turn indicates a higher wettability which allows a shorter disintegration time. Therefore, the ODT formulations containing superdisintegrants crospovidone or croscarmellose have a lower wettability, and thus disintegration will be slower than PEARLITOL® Flash ODTs which contain no superdisintegrant.