Impact of the Vegetable Pea Protein NUTRALYS® on Satiety, Food Intake and Gut Hormones in Humans

Overweight, obesity and lifestyle diseases are still increasingly major public health concerns worldwide. Dietary habits and nutrients intakes recommendations play a key role in prevention and enhancement of satiety is a good support for weight loss and maintenance. Thanks to their higher satiating effect as compared to fat and carbohydrate, proteins such as whey proteins might be good candidates in this context. Nevertheless, consumption of protein from animal source has climbed sharply in correlation to gross domestic product (Combris, 2013) while vegetable protein consumption has increased only by 15%. Over one third of global cereal production is incorporated in the feed of animals reared for their meat (protein); such trends are associated with general changes in lifestyles and standards of living and related to worrying issues such as the sustainability of food consumption patterns and the preservation of natural resources. These concerns lead us to explore other possibilities in terms of protein sources, such as vegetal ones.

The purpose of this study was to compare the satiating capability of NUTRALYS® pea protein with a commonly used whey protein and establish if it can affect subjective ratings of appetite and some hormones secretion, and therefore if it could be suitable for promoting satiety as a good alternative to whey proteins when added to dietary products.

Design of the study

On each exploration day, ratings of satiety and blood samples were collected:
‐ prior to consumption of breakfast (baseline ratings) and then at regular intervals of time during the course of the day (Figure 2) after which the volunteers were free to leave the unit.

For the question “how full do you feel?” (Figure 3), consumption of the CS preload was equally filling as the WPS or the 15gNS; it tended (p=0.058) to be less filling than the 30gNS. Moreover, the 30gNS had a significantly higher effect (p<0.05) on satiety perception than the 15gNS. There were no other significant differences for this question.

For the question “how hungry do you feel?”, following the WPS preload, participants reported being significantly less hungry compared to the CS (p<0.05) and to the 30gNS (p<0.01), with a trend observed for lower ratings following the 15gNS (p=0.05); no other soups differed from control or each other. For the question “how much do you think you can eat?”, participants following the CS believed they could eat more than following the 15gNS (p<0.05), with no other differing from control.For the other questions, responses showed no particular impact of NUTRALYS® as compared to the control group.

In any case, there wasn’t any digestive complaint or adverse event related with the consumption of any soup

However, there were no significant differences in caloric intakes ad libitum meal whatever the protein preload soup ingested. 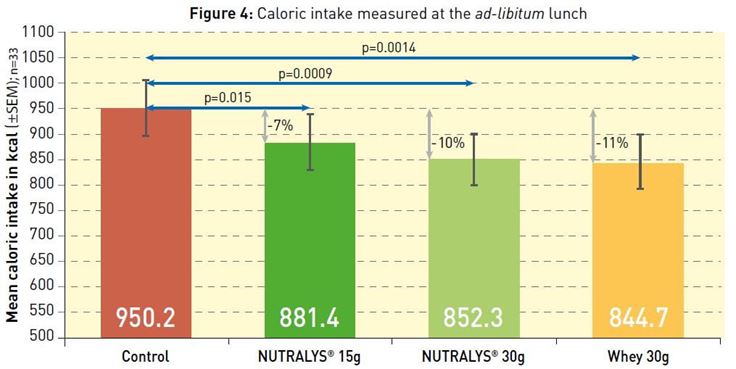 CCK (Figure 5): a trend for higher CCK levels following the 30gNS was observed when compared to CS (p=0.056). The 30gNS resulted in a higher and more sustained secretion of CCK as compared to the 15gNS, but there were no significant differences between all the products.

GLP-1: The WPS or 30gNS soups induced sustained and increased levels of GLP-1 over the whole duration of sampling as compared to that of the CS or 15gNS, but there were no significant differences between all the products.

PYY: The 30gNS appeared to delay the peak as compared to the WPs and CS, but differences in AUC values after the consumption of the test products were not significant. 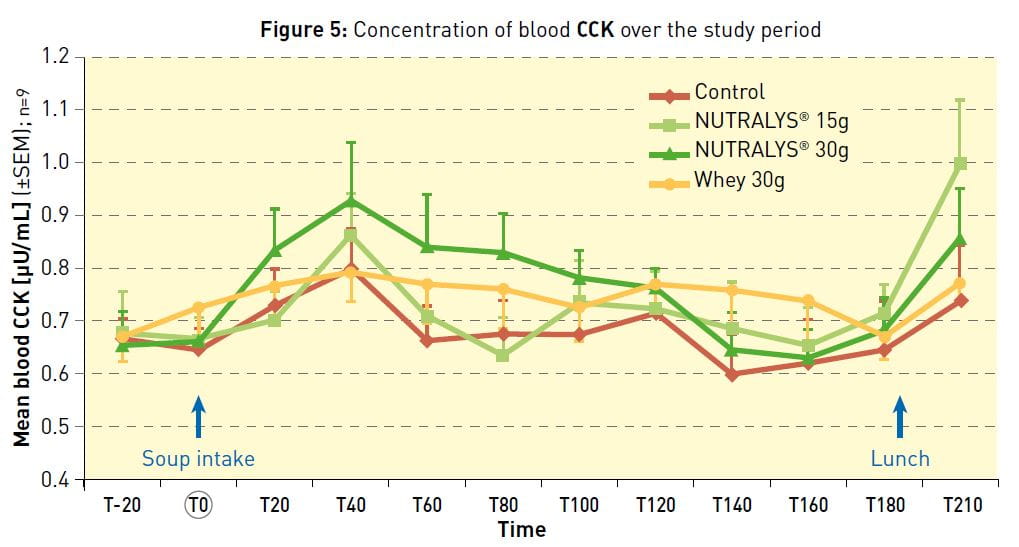 Different factors might have an impact on satiety effects of proteins: the composition of stemming circulating amino acids, the presence of branched chain amino acid (BCAA) and particularly leucine, but also tryptophane.
Among hypothetical mechanisms explaining the results observed, the delayed release of some amino acids such as leucine (with known satiating capability), the release of peptides possibly triggering some specific responses (reduced systemic issues arising from excessive oxidative stress, increased CCK release from the intestinal mucosa) may occur with NUTRALYS® possibly triggering a delayed satiety response not seen in this short term design.
The differences in AUC between the products were not statistically significant for some gut hormones, likely due to some lack of statistical power (small subpopulation) and to a high variation between the plasma levels of these hormones across participants.
All these hypotheses should deserve longer term designed trials to be tested.

In this study, two concentrations of NUTRALYS® pea protein (30g and 15g) were tested for their satiating effect when incorporated in a preload vegetable soup and compared to a control soup with no added protein (negative control) and a soup with 30g whey protein (positive control). NUTRALYS® seems to be a good candidate, as it induces, similarly to the whey proteins, a lower caloric intake than the control at both dosages and with no significant differences between the three products. Moreover, the NUTRALYS® soups were rated as modulating in some way the feeling of fullness, and induced modulation of gut hormones production. Taken together, these results demonstrated that the 30g NUTRALYS® soup led to increased perceived levels of satiety.
NUTRALYS® pea protein appears to be a high quality alternative candidate to animal protein, with similar bioavailability of amino acids and digestibility and a sustainable way of production (Yang et al., 2012). Moreover, as an intermediate-fast protein, it can offer a better post-prandial utilisation and a better efficacy by inducing a better daily nitrogen balance.

The information contained in this document is to the best of our knowledge true and accurate but all instructions, recommendations or suggestions are made without guarantee. Since the conditions of use are beyond our control, we disclaim anyliability for loss and/or damage suffered from use of these data or suggestions. Furthermore, no liability is accepted if use of any product in accordance with these data or suggestions infringes any patent. No part of this document may be reproduced by any process without our prior written permission. © Roquette Frères S.A. - 11/2014.